My wife and I went for a walk today along the Fox River, which is mostly frozen these days. This winter has been colder than most in recent memory, but we haven’t wanted to let it keep us from enjoying the exercise and scenery. The temperature was slightly below zero when we left the house. 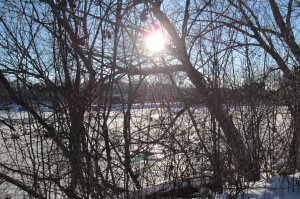 I generally like warm weather better than cold, and this winter has made me miss the days of global warming. My intention isn’t to enter the debate about whether or not there is such a thing. There are plenty of people on both sides who know they are right, and everyone who thinks otherwise is an idiot. No, I just prefer warmer weather. However, I’ve found that even sub-zero isn’t a big deal if you’re dressed warmly. The only real casualty was my face as the wind chills made it hard to form coherent words. I suppose my wife didn’t notice any difference.

One thing we’ve been enjoying on our winter walks is the return of the eagles. Lots of them make their nests along the river, especially at this time of year. Today we saw six or seven, including two in a tree.

We also saw  two hawks, a robin, a cardinal, and a black squirrel. Oh yeah, and there were some ducks out on the unfrozen part of the river. We also saw some flying, and after seeing the eagles gliding so easily, it looked like the ducks were putting way too much effort into flapping their wings.

I’ve been wondering if the birds feel the cold at all. Do they miss global warming? Up there where the eagles were soaring, it had to be a lot colder than where we were, but I didn’t hear them complain. They looked like they were enjoying themselves.